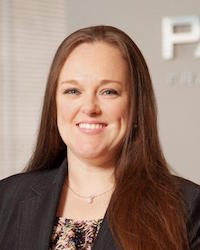 Katherine Moore began as a law clerk in 2017 before joining the firm as an Associate in 2018. At the outset, she will be engaged in the general practice of law, with emphasis on civil litigation matters. Ms. Moore graduated summa cum laude from the Indiana University Robert H. McKinney School of Law in May 2018 and also earned a Graduate Certificate in Advocacy Skills. During law school, Ms. Moore was named to the Moot Court Society Order of the Barristers in the fall of 2016, served on the Moot Court Board as the Associate Justice for Scorekeeping, was an associate member of the Indiana International and Comparative Law Review, and advised first-year students through the Dean’s Tutorial Society. In addition, she competed in two national moot court competitions for McKinney—the Evan A. Evans Constitutional Law Moot Court Competition in the spring of 2017 and the NAAC Moot Court Competition, sponsored by the ABA, in the spring of 2018.

Prior to attending law school, Ms. Moore graduated from Indiana University Bloomington in 2011, earning a Bachelor of Science Degree in Biochemistry and a Bachelor of Arts Degree in Spanish. Before coming to Parr Richey, Ms. Moore worked in the insurance industry as a claims adjuster handling automobile claims involving property damage and personal injuries.

Ms. Moore received the Mitzi H. Martin Best Advocate in the Preliminary Rounds of the Staton Competition Award. She was also recognized on the Dean’s List at Indiana University Robert H. McKinney School of Law every semester during her law school education.