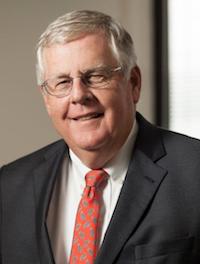 KENT FRANDSEN has practiced with the firm since 1977, concentrating in civil litigation, electric utility, zoning and land use, and education law. Following graduation from law school in 1975, Mr. Frandsen served as a law clerk to The Honorable James E. Noland, Judge of the United States District Court for the Southern District of Indiana.

Since 2009, Mr. Frandsen has hosted a weekly radio show, WHAT’S UP, BOONE COUNTY (91.1 FM) for which he has conducted over 500 interviews of individuals who affect the quality of life in the community.  Among his guests have been then-Butler Men’s Basketball Coach Brad Stevens (a Boone County native) and Mitch Daniels, once as Governor of Indiana and once as President of Purdue University.  (Listen to Mitch Daniels Interview)

Mr. Frandsen has been named an Indiana SuperLawyer each year since 2005

In 2002, Mr. Frandsen was presented with the Chairman’s Award for outstanding service to the Indiana CPA Society. That same year he and his wife Charlotte received the Philanthropists of the Year award from The Community Foundation of Boone County. In 2007, he received the Isaac Grainger award for volunteer service to the United States Golf Association.

An avid golfer, Mr. Frandsen was captain of the Indiana University golf team in college. He has been the Indiana State Amateur champion three times and in 1990 was inducted into the Indiana Golf Hall of Fame.