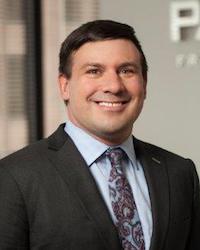 Prior to joining the firm, Mr. Fetty worked in Detroit, Michigan, where he spent three years with the Michigan Court of Appeals, first as a research attorney then as a clerk to the Honorable Kathleen Jansen. While in Michigan, he assisted a Special Master in determining individual damages in a 42 U.S.C. § 1983 class action claim against the City of  Detroit and assisted a well known arbitrator in the drafting of labor and employment arbitration opinions.

Mr. Fetty has presented on matters regarding director responsibility, cooperative organization and structure and labor and employment. His publications have included:

What You Need to Know – Lobbying by all Types of Exempt Organizations (Indiana CPA Society, June 10, 2010)

Legal Considerations in Organizing a Food Cooperative (Up and Coming, Up and Running Co-op Conference, February 28, 2014)

Mr. Fetty is currently serving as a board member and President of the Board for the Indiana Cooperative Development Center.  He also serves on the legal committee for the National Telecommunications Cooperative Association.

Originally from Frankton, Indiana, Mr. Fetty was a four-year varsity wrestler at Manchester College and an Academic All-American.  He served as managing editor of articles for the Michigan State University Law Review.  Mr. Fetty is also an eagle scout.

From 2010 through 2017, Jeremy was selected as an “Indiana Super Lawyers Rising Star” in the field of Utility Law.  Candidates for Rising Stars must be 40 years old or younger and have been in practice for 10 years or less and are selected following peer nomination and an independent research process conducted by Law and Politics Magazine.  Approximately 2.5 percent of  lawyers in the state receive this distinction.